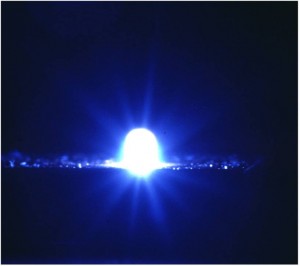 Fundamental diagnostics of various spectral sources, including plasmas and pulsed glow discharges, are a main theme of our research. Here, lasers can be used merely as sampling devices to introduce the material into the discharge (e.g., laser ablation) or as additional excitation-ionization sources of the species already present in the discharge. A variety of spectroscopic and mathematic techniques are employed in our research. Plasma emission, laser induced fluorescence (both molecular and atomic), diode laser absorption, and Raman scatter experiments are conducted in the laboratory.

Strong links exist between our research interests and those of Dr. Smith in Chemistry, Dr. Hahn in Mechanical and Aerospace Engineering, Prof. Panne and Prof. Niemax at BAM in Berlin, Germany, and the researchers at IPCF, CNR in Pisa, Italy. These links result in close, international collaborations. 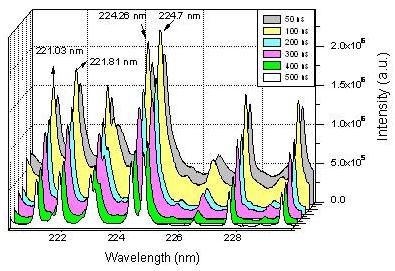 In Laser Induced Breakdown Spectroscopy (LIBS), the plasma formed evolves in space and time and its spectrum provides useful analytical information. For this purpose, the most interesting plasma diagnostics indicators are the electron temperature (Te) and the electron number density (ne), since one can relate these two parameters to the possible existence of local thermodynamic equilibrium (LTE) conditions in the plasma. Most studies in this field have been performed under the assumption of the existence of such LTE conditions. Few studies, however, have been devoted to the experimental evaluation of such assumption. One of the approaches that can be used for the evaluation of LTE condition is the Line-to-continuum intensity ratio method. Experimentally, the plasma excitation temperature, Texc, is obtained from a conventional Boltzmann plot, and the ratio between the spectrally integrated line intensity and the continuum intensity is measured. By inserting these two experimental values into the theoretical expression, one can check whether the electron temperature derived in this way is equal or different from the excitation temperature provided by the Boltzmann plot. Any deviation from LTE conditions can then be assessed.

LIBS emission measurements are often affected by the phenomenon of self-absorption, i.e., the plama conditions are optically thick. It is important to take this effect into account for more accurate plasma characterization. The aim of the present work is to propose the application of a well know method, which is simple and quick to implement. It uses an external mirror to double the optical path length of the plasma emission in direction of the monochromator. The calculation of the so-called duplication factor as well as the comparison of the line profiles obtained with and without the mirror allow not only to prove the existence of the effect but also to apply a correction factor and to retrieve the original profile. It is shown in this work that the most direct application of the mirror approach is to improve the linearity of the calibration curves and the accuracy of the temperature evaluation though the Boltzmann or Saha-Boltzmann plots. 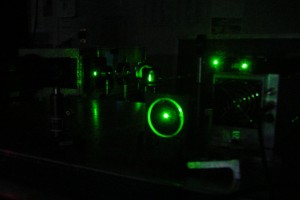 This project focuses on time-resolved applications of microchip and powerchip lasers, a new class of Nd:YAG laser. These lasers produce ~500 ps pulses at repetition rates between one Hertz and several tens of thousands of Hertz. Previous work in our lab has used these lasers for laser-induced breakdown spectroscopy, where they yield good signal to background ratios in elemental analysis. We are studying the time evolution of the transient plasma at the center of this technique. We have recently collaborated with the German Federal Institute for Materials Research and Testing to study the plasmas produced by an even newer class of laser. We have also used powerchip Nd:YAG lasers for microanalysis, with an eye for using them for microscopic elemental mapping thanks to their high repetition rate. Because powerchip laser pulses are shorter than (or on the same order as) the fluorescence lifetime of many materials, we have used them to measure the fluorescence lifetime of different materials. Eventually, we hope to measure the fluorescence lifetime of micron-regime aerosol particles. The fast pulse and high repetition rate may also be useful for discriminating against fluorescence in Raman measurements. 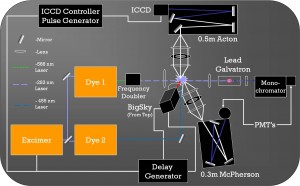 A fundamental understanding of the mechanisms that give rise to the formation and evolution of a laser-induced plasma encompasses considerable past and continued research. This project hopes to add to this knowledge by combining experimental observations with computer models of the evolution of a plasma plume. Space-resolved and time-resolved atomic and ionic populations will be experimentally evaluated, and these population densities will be used to refine the computer model of a plume expansion. Specifically, the evolution of the plasma volume is investigated using a combination of emission and laser-induced fluorescence (LIF) measurements.

To accomplish this goal, a LIBS-LIF set-up has been assembled consisting of an excimer laser pumping two dye lasers. The simultaneous availability of two excitation wavelengths allows reaching highly excited levels of the atomic (ionic) species selected and monitoring the resulting fluorescence emission originating either directly from the excited level or indirectly by nearby levels populated by energy transfer due to collisions in the plasma. Since it has been shown that time-resolved fluorescence measurements are essential for an accurate evaluation of the atomic populations, the fluorescence is measured by both an ICCD camera on a spectrograph and a Microchannel Plate Photomultiplier (MCP-PMT) on a monochromator. The ICCD gives spatial resolution within the plasma, and temporal resolution is achieved with a variable delay. Resolution within the excitation pulse itself is possible with the MCP-PMT. 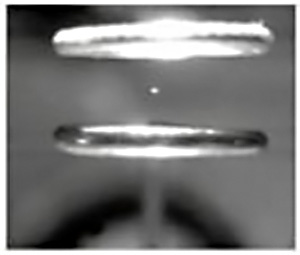 The development of an electrodynamic balance used for Laser Induced Breakdown Spectroscopy (LIBS) studies and the operational characteristics of the set-up were refined in our lab in order to both recreate and expand upon experiments by Hahn in which a laser plasma is formed and particles are introduced into the plasma. Our experiment allows the particles to be spatially confined for long periods allowing for studies with laser energies producing fields below the air breakdown threshold. Initial results of experiments were promising and pointed us to further study the differences in laser-particle and plasma particle interactions, as the understanding of the overall processes governing plasma-particle interaction is considered to be essential for an improvement in the quantitative analysis of materials by the techniques of LIBS. These initial results came from data obtained using LIBS on particles containing Ca, Mg and Na and time integrated measurements. Work is now moving into temporally resolved studies to evaluate simultaneously the evolution of emissive species within the plasma volume. 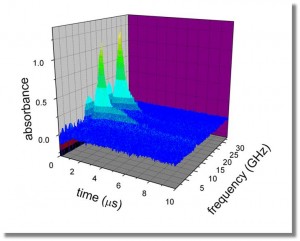 The vast majority of spectroscopic analytes exist in the ground state. Accordingly, absorption techniques allow a researcher to probe the bulk of the analyte. However, the selectivity of the technique comes from the light source used to interrogate the analyte reservoir (in this case a plasma). Therefore, a tunable source is a must, leaving diode lasers and dye lasers. Dye lasers offer a much wider range of wavelengths, but increase the complexity and cost of a system. Additionally, the lasers used to pump the dye lasers, often gas lasers, have horrible noise in their pulse energies. Absorption measurements suffer greatly from noise in the reference light source. Diode lasers are much cheaper, simpler and more stable. This project focuses on the use of these diode lasers to probe atomic and ionic species within LIBS plasmas.